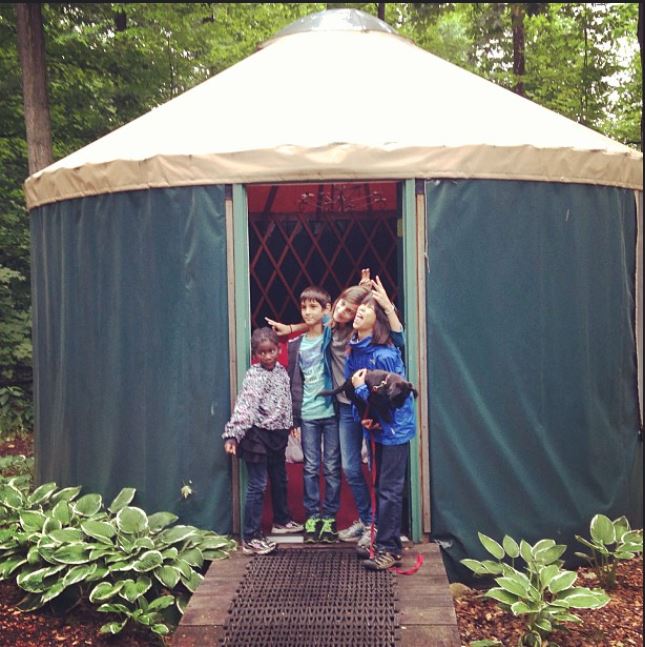 Hey, hey! A big Jensen hello to our faithful 1.2 million Jammin’ With the Jensens subscribers out there in YouTube land. It’s me, Todd Jensen, Dad-Ass Supreme of your favorite fun-loving vlogger family.

If it looks I’m recovering from a midweek boxed wine bender and I passed-out with my head partly inside a half-eaten bucket of fried wing dings, you’re mostly right. I’m here to tell you guys why Jammin’ With The Jensens Episode 204: Dad Loses A Shoe At Fairy Tale Brook in LEGOLAND didn’t post last night. I got crummy news. Jammin’ With The Jensens will not be airing regular episodes in the foreseeable future. Unfortunately, the Jensens have all kinds of shit going on right now. So on behalf of my lovely wife, your vlog mother, and queen of the Jensen Bitchin’ Kitchen…Margo, if you’re watching this sweetheart, I’m super sorry as fuck, honey. And from the Lil’ Vowelies: Aiden, Esmerelda, Isabella, Odin, Ulysess, and sometimes Yanis—we appreciate your viewership and hope you guys stick around while your favorite family works out some serious interpersonal trauma and deeply embedded issues.

In the meantime I’ll periodically be posting random updates from my room here at the Red Roof Inn, mostly to feed fresh chum to that cutthroat bitch that is the YouTube algorithm. A few days of social media obscurity and Jammin’ With The Jensens will get buried deeper than the Jensen family dog in Episode 86: Roscoe Gets Biffed By A Cement Truck And Is Buried Near The Backyard Yurt O’ Super Fun. If you truly love our family, and we know you do, diminishing clicks mean the Jensen will essentially be murdered from the internet. You don’t want to be the subscriber who murders the Jensens, do you?

And for god’s freaking sakes, don’t subscribe to The Miller Time Vlog. That family is pure turds. Same goes for Kissinger Army, Gants In Your Pants, and whatever other chintzy second-rate family vlogs have metastasized from the grungy taint of suburbia in the last 10 minutes. Your family adventures are lame. A whole episode devoted to taking your brats on a Sunday post-church trip to Carl’s Jr in a Chevy Astro Van? Any family without a vlog can do that boring shit. The Jensens vacation at Schlitterbahn Water Park and get there in a Chrysler Pacifica with less than 10k miles. You’ll never be as fucking viral as the Jensens. Google search results are the Jensen’s turf! Get out or get got.

Margo, I hope you’re watching this, my love. Baby, since you left with the kids, sans Yanis, I finally realize that I might have issues. Maybe my “hellishly overbearing” behavior isn’t particularly conducive to the general well-being of the family. You might be right. But keep in mind the best family vlog directors are rarely easy to work with.

That said, perhaps posting the video of Aiden puking all over his cut-off OshKosh B’goshs during his parochial grade school production of Methuselah Pops a Wheelie didn’t exactly boost his already fragile self-esteem. I probably shouldn’t have shared the time I read aloud Isabella’s diary after she “fell in love” with the new neighbor boy. She was eight. It wasn’t real love. How was I supposed to know she’d toss the diary in the burner barrel and lock herself in her room for three days straight? And I’m sorry for that fake suicide note I left on the kitchen table beside the hidden camera. But you gottta’ admit that your reaction was the raw shit.

Before you say I told you so, don’t forget how many views each of those entries received. As I explained after I unilaterally decided to produce a family vlog—birthday parties and pony rides just don’t get the big clicks in the Thunderdome world of family vlogging. It’s just a simple axiom of media that monetizing your kids’ childhoods means publicizing honest moments that may or may not cripple their maturity indefinitely. Besides, after I quit my salaried position at the textile plant and blew my 401(k) on video equipment to start production on the vlog, I didn’t exactly have much choice, now did I?

Margo, I spearheaded Jammin’ With The Jensens primarily to boost your social status. What’s more empowering than foisting a plush upper-middle class lifestyle on peer families too destitute to afford ad-free YouTube, let alone a courtyard pergola smothered in wisteria? Every cameo of that gnarly lush shit in our Best-Of-worthy summer soiree episodes boosted your profile amongst families without backyards, yet alone the coveted climbing-vine-enthusiasts demo.

The intimate antics of our five beautiful children, and Yanis, are the toast of comment threads amongst followers we don’t know in any meaningful way beyond an avatar and a username. Don’t believe me, just listen to our subscribers. MustangBetty wrote “Adorable little buggers. Makes me wish I didn’t barter mine to nomadic gypsies for a carriage ride to the Grateful Dead concert that one time. Lolz.  #adulting.” CandyMan32 wrote “Who has two thumbs and a mustache and would babysit those two sweet little girls for a night? This motherfucker.” See honey, another big fan of the kids. SoccerMILF wrote “Hey guys. I’m horny and I live 3 miles away.” That’s a bot, Margo. No one is immune to bots. But you get the point. Subscribers jam with the Jensens to live vicariously through the Jensens.

Anyway, to you all at home: Jammin’ With The Jenses is about to sign-off until my next dispatch from the Red Room Inn. Like always, I’m going to end the episode by answering a random subscriber’s question. Today’s question comes from SpaceBoyElliot. SpaceBoyElliot asks, “Why does Yanis always have to sit in the back middle seat of the Chrysler Pacifica, and only gets to eat leftovers? PS-Can’t wait for the episode when the Jensens ride Segways through the Ark Encounter.” Good question, SpaceBoyElliot. Ever notice how Yanis doesn’t look like the other Lil’ Vowelies? Well, that’s because he’s the bastard child of my wife’s first marriage. Gasp! I know, right.

Dammit. Shit. There I go again. I shouldn’t have said that in front of 1.2 million subscribers. I’m sorry, Margo, wait, what?1-point-freakin’-two million subscribers, Margo! I guarantee that every single one of them is at least somewhat jealous of the Backyard Yurt O’ Super Fun. Also, I promise that our children will emotionally heal, given time, except probably Yanis. But we can’t afford the necessary intensive therapy without the gravy train. We just can’t.

And you guys in YouTube land, remember: The Jensens are a completely and totally normal family. We’re just going through some shit right now.

Matt's best-selling novel Save Me, Rip Orion was a finalist in the Amazon Breakthrough Novel Award 2013. His writing has been published in McSweeney's, Sherman Oaks Review of Books, Defenestration, Neutrons Protons, The Crucible, PGHCOMEDY, and various blogs. He authored the Back Deck Report on the Fansided site Rum Bunter. After years performing sketch/improv comedy and storytelling, he’s hung up his stage cleats. Check out his obligatory blog, Gunmeddle. Or don’t.