No One Cares About Vague BIRDS

A Song of Ice and Fine Writing 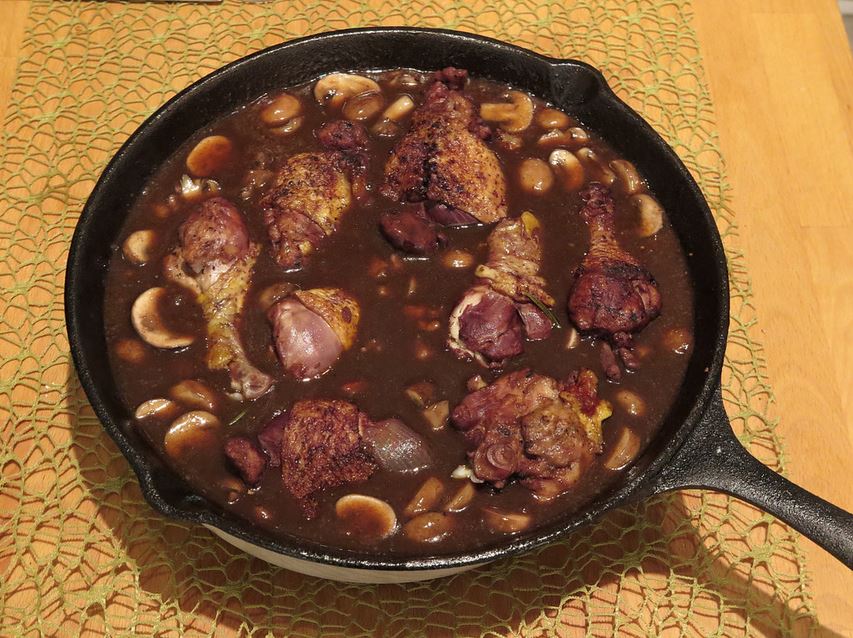 Good morning. Why don’t you make your own fucking yogurt, for once? That’s what I think you should do today, but then, what do I know? I’m just the food editor of the New York Times. Which means I work in a newspaper office, where it’s pretty hard to avoid exposure to the news. When I say we should get hazard pay, people think I’m kidding.

Sorry. People still have to eat, I guess. Let’s proceed.

Oh boy, Tejal Rao seems to have adapted, from some chef in Meridian, Mississippi, a recipe involving bulgur. (Wonder who he voted for.) For all I know it requires a pint of lime juice and a dozen ocelots, so you’ve been warned. Want to live forever? Not any more, right? Still, how does an uber-healthy, eggplantless, Parmigianless Vegan Eggplant Parmigian sound? Believe me, it’s worse. So why not instead make Gabrielle Hamilton’s dictatorially described and insanely complicated coq au vin (above)? Be sure to follow the instructions to the letter. You’ll be extremely frustrated with the procedure and mildly disappointed with the result!

Not up for coq or vin? No worries, as Americans have for some reason appropriated from the Australians. (Ironic, that. We have abundant worries, even if half the country seems unaware of that fact.) Instead, I think you should think about Melissa Clark’s Twelve Mushroom Frittata. I haven’t had the heart to look at it, if you must know. It either calls for twelve mushrooms or twelve kinds of mushrooms. You didn’t know there were twelve kinds of mushrooms—at least, outside the lab of a professional mycologist–and neither did I. If that’s what she’s asking for, good luck finding them and let me know how it turns out but not really.

It’s avocado season. It’s also corn season and crab season. It’s also the season for not wanting to get out of bed. So take your pick: peruse Martha Rose Shulman’s recipe for Avocado, Corn and Crab Salad, or put it off until life improves. Or make it anyway—in your pajamas– and hope that Martha’s clever use of sherry vinegar changes your mind. It just might, I suppose.

If you’re like me, you think veal paillards sound good right about now—maybe saltimbocca-style, with prosciutto and sage. (That’s Italian for “jumps in the mouth,” and does it ever.) But guess what! If your spouse is like mine, you’re forbidden from buying veal in any form whatsoever.  As though that will help anything.

So what should we do? Mumble imprecations and whip up a big—a very big–batch of old-school whiskey sours? Yes! But then let’s throw together Pierre Franey’s version of Chicken Tonnato (using tuna canned in oil or in water; your call) and tell our killjoy loved ones that it’s veal and dare them to do something about it. Sound like fun? But wait—serve it with Egg Noodles Koppleman (there is no Koppleman. Or maybe there is. Who cares. Just do something to the noodles and call it that), and, for dessert, think about but decide against Yossi Arefi’s Balsamic Vinegar-Olive Oil Ice Cream (Jesus), and just buy a pint of what Ina Garten would no doubt call “good” vanilla. Really? Are you sure you don’t mean “bad”? Oh never mind.

You may not feel like eating meat. In which case you can make Mark Bittman’s crunchy, austere Raw Carrot on a Plate. You can make Jamie Oliver’s Poached Whatever Dribbled With Gooey Stuff. You can make David Tanis’s Vegetarian Twice-Cooked “Pork,” for all I care. Did I make these up or do they really exist? Does it matter? In any case, if you love tofu so much why don’t you marry it?

But are those kids I hear in the background? Then let’s talk pizza. Alice Waters (she of Chez Panisse fame) has a typical Waters-ian recipe for a dandelion-whelk-Fontina pie that will inspire the young ones to sue you for child endangerment. Still, make it if you must. Just remember to start earlier than usual—like around planting time of last year, since Alice’s no-frills, sanctimonious, hilariously impractical recipe calls for growing your own durum wheat. Harvest in October (duh!), mill immediately, and be sure to let the dough rise over-November to assure maximum elasticity.

Too much? Too time-consuming? Too enraging? Then let’s make something hopeful. I’m thinking Molly O’Neill’s recipe for skirt steak and peppers. I’m thinking Steve Raichlen’s take on pulled pork. I’m thinking Kim Severson’s version of beer-can chicken. But look, let’s just make something. And let’s do it barefoot. And let’s open a bottle of a slightly-pricey Malbec, and drink and sing and dance and just not care anymore and know, or at least hope, that accompanying it with Jacques Pepin’s French Green Beans and Shallots will save us. Because it has to!

We’ve got thousands of such recipes, if you’re still reading, over at NYT Cooking, from such stalwarts as Julia Moskin, Nigella Lawson, and Yotam Ottolenghi. (You’ll need a subscription. Oh fuck you, you can so afford it.) Will they help? You tell me, at  coookingcare@nytimes.com . We’re also on Twitter, Instagram, and Facebook. Visit us, like us, follow us, give us the time of day—whatever you’re into.

On second thought, don’t bother. The less time we have to spend online these days, the better.