When Suspense is On Deck

The Wisdom of Editing

When Suspense is On Deck 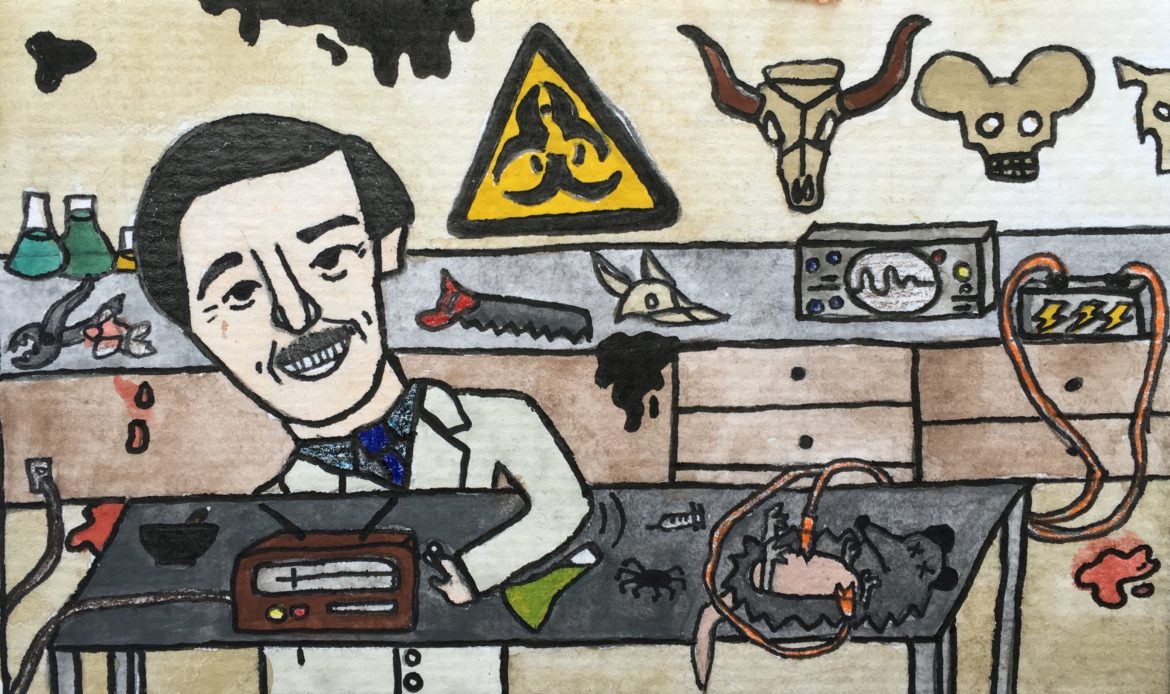 Rare photo of Walt Disney when he was a mad scientist

To call The Picasso Cypher another ordinary historical baseball murder thriller would be far more than a lie. This latest novel from the author of The Abraham Lincoln-Confucius Jinx and Five People You’ll Never Meet is such a fiendish feast of twisting, interwoven yarns, it is essentially like a wool blanket that is both fiendish and delicious.

In the opening pages we are confronted with a scene that seems both familiar and disjointed. It is 1939, and the Yankee baseball great Lou Gehrig is giving his impassioned “I Have a Dream” speech. Gehrig, whose unbroken streak of games played earned him the nickname “Iron Mike,” is being forced to retire from baseball by the disease that would, someday, if all went well, bear his name.

Suddenly shots ring out. Gehrig slumps lifeless on the gravel surrounding the pitcher’s mound. Pandemonium erupts. What did Gehrig know about the genetic code that later in the book will become a big deal? Who is trying to silence him?

Abruptly we flash to a laboratory, where the young inventor Walt Disney is performing his famous “animation” experiments on dead animals. As he hears the chaos on his radio and reaches to turn up the volume, his hand topples a beaker of a luminous green fluid, which oozes across his desk to engulf a spider that had bitten him earlier. The spider becomes radioactive, and the bite becomes retroactive.

In a hyper-alert state, Disney grabs the Baseball Encyclopedia and begins running Gehrig’s career RBI totals through his oscilloscope. The waveform they produce on the glowing screen, when reflected in a “da Vinci device” (a mirror), spells out a genomic code. Emboldened by the finding, Disney recruits wisecracking sidekick Thomas Aniston (a character resembling the real-life inventor Thomas Edison) to begin a trek to Africa, where they will hunt for the virus that may later destroy humanity. Aniston has just returned from his fateful experiment in which, flying a kite in a thunderstorm, he harnessed nature’s raging power of electricity. He set up elaborate networks to distribute electric power to businesses and homes across America, but soon turned his attention to what would become a ruinous, life-long obsession: vowing to do everything he could and stop at nothing to put makers of batteries out of business and to physically crush the battery-operated toy rabbit industry.

Disney and Aniston soon plunge into the African jungle, where, using a crude satellite-based tracking device, and by listening to hooting noises, they stumble upon a village inhabited by savages. Surrounded by human skulls and bones is a man who appears to be of European descent, and there Disney utters his famous words, “Dr. Atkins, I presume.” Atkins, a former Tufts University cryptologist and author of Leadership Secrets of the Child Actors, tells them of the clandestine international religious society that is plotting to steal the gene responsible for hypertension. The sect is led by an insane bishop who can only move diagonally.

The page-turner continues like this for page after page, each one turning in its turn, especially in the large-print edition, as the three men of science unite to unlock the shrouded mysteries, also recruiting a symbologist (someone who studies symbols), a chromachronologist (someone who colors clocks), and a young mute boy named Charlie, who would later star in silent comedy films.

Then something else happens, and they recruit Noah Webster, a local wordsmith known for turning out book after book filled with words he has made up, and Elvis Einstein, a brilliant young singer who has figured out a way for the B-sides of his vinyl records to sell more copies than the A-sides. This plucky band of misfit geniuses and -ologists brave an epic Spring blizzard dumping more than 1,200 inches of snow on the city (measured horizontally) before their final desperate attempt to dig up a destruction device that’s been long buried in the dirt beneath second base at Yankee Stadium — while Einstein sings the National Anthem to distract the umps. Then they realize it was at the old Yankee Stadium and go over there.

Spoiler alert: if you want to know what happens on the last page, you’ll have to read the book. (Hint: there is some time travel involved.)

Don Steinberg is editor of a little black book called Jokes Every Man Should Know and creator of America Bowl: 44 Presidents Vs. 44 Super Bowls in the Ultimate Match-up.